Made of Walking Akamas

I’ve been spending the last week in a town called Neo Chorio, near the Akamas natural reserve on the island of Cyprus. This was the location for the fourth iteration of Made of Walking: a recurring symposium organized by the Milena Principle, a pan-European collective of multidisciplinary artists and thinkers bound together by friendship and collaboration. The theme for this summer’s iteration was Plant(e)scape, exploring the relationships between walking and vegetal life, and the various ontological, political, epistemological and aesthetic questions that emerge from that connection.

So over the last week or so, as we walked, listened, discussed, performed and endured scorching temperatures together, all sorts of interesting synergies began to emerge between our projects and perspectives. Many of the symposium’s attendants presented work that challenged us to engage with plant life in novel ways, using our faculties of intuition, empathy, playfulness and underprivileged senses. Utrecht-based walking artist Ienke Kastelein invited us to walk “in resonance” with plants, seeking to intensify our perceptions of vegetal images, smells, sounds and sensations of touch in a poetic workshop. With Stefaan van Biesen and Annemie Mestdagh, an Antwerp-based couple, we embarked on a meditation on the (scent-based) language of plants through the extended caressing of lemon verbena leaves. Stefaan also read some of his beautiful Letters to a Tree to us. And Lezli Rubin-Kunda, an Israeli artist, invited us to come out to the field to ‘simply’ play with plants in whatever way we felt inspired to do: be it throwing them, dancing with them, turning them into makeshift musical instruments, and rubbing them on our bodies, among many other things.

A number of the attendants came to Made of Walking to tell us about their work and current walking-related projects. Haris Pelapaissiotis, a professor at the University of Nicosia, explored deeply personal stories with his walking partners in conjunction with the spatial narratives of Nicosia, whose recent transformations have left numerous informal spaces or ‘urban amnesias’ to emerge as testaments to an anxious contemporary urban life. Arianna Economou, a Cypriot dance artist and dance activist, has used pedestrian tactics to open a space for dialogue and healing concerning the arduous political history of the island’s invasion and division. Tracey Benson, an Australian multimedia artist deeply engaged with questions of land ownership, belonging, and indigenous and migrant identities, developed an augmented reality project connecting Cyprus’ sacred trees to its mythological roots. And Greg Giannis shared his mappings of solo & group walks, provoking an interesting discussion on the challenges of walk documentation and of finding institutional recognition for walking arts.

My own project, “Miniature Phenomenology: an Odyssey in Microlandscapes”, consisted of a short lecture and a subsequent walk with magnifying glasses. The talk explored the history of philosophers’ treatments of plants, from Aristotle through Hegel and Nietzsche, and summarily presented some of the arguments made by contemporary eco-philosophers like Timothy Morton and Michael Marder on how we might move towards a less instrumental or agrilogistic relationship to plant life. Subsequently, I referred to Gaston Bachelard’s survey of ‘miniature literatures’ in the Poetics of Space to propose a strategic shift towards a molecular scale, in order to explore how recalibrating our perceptions might facilitate a more imaginative engagement with a vegetal World. 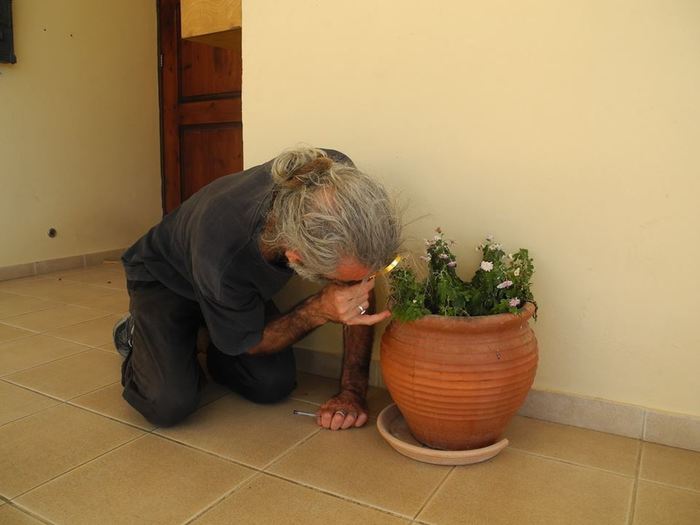 On the brief walk, Tracey and I remained for some time at a conifer tree whose bark was leaking with sap. Drops of resin had captured individual ants in amber sarcophagi, and the magnifying glass enlarged this eerie phenomenon to captivating proportions. With magnifying glasses, the textures of flowers and plants became visible. We also found an apparent sex cult of some thirty snails in one of the tree’s hollows. After the walk, we had a productive discussion about the extent to which this method achieved the phenomenological shift we had hoped for. Haris suggested that perhaps the use of magnifying glasses reinforced the traditional dominance of the visual in Western culture, and that this dominance could in some way be linked to those instrumental-aesthetic-scientific phenomenologies that are tied together in destructive ways when it comes to our understanding of plants. On the other hand, several participants reported having achieved a state of increased phenomenological awareness: as soon as something of interest appeared under the lens, it was difficult to repress the desire to understand what kind of thing this is. Similarly, the observation of something ‘beautiful’ would catapult us back into an aesthetic phenomenological mode. Raising our own awareness of the amount of time and effort it takes to overcome such instincts and achieve a sustained poetic-imaginary state of relating to plant life was, I believe, an important lesson that could serve as a first step to changing our ways of thinking and seeing. 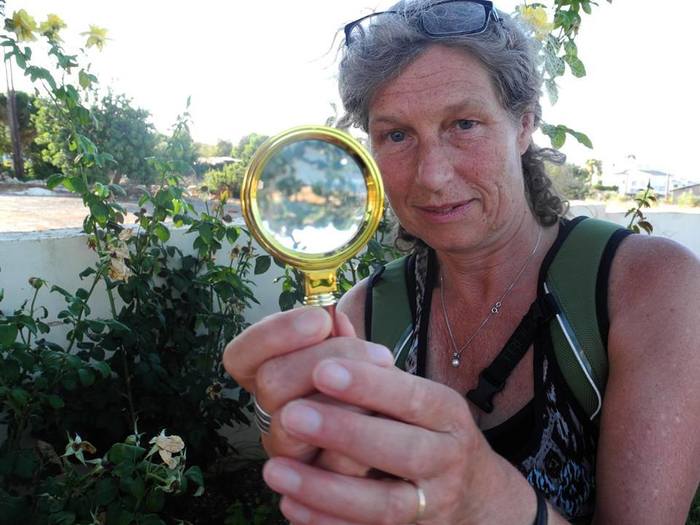 Ienke Kastelein and her magnifying glass

Now most of my new walking friends and colleagues have left for their homes, some just down the road, others all the way Down Under. Meanwhile, I am sheltering from the sweltering heat in my air-conditioned hotel room in Paphos, dreaming about future walks. My gratitude goes out to Geert Vermeire for organizing this beautiful symposium. I hope to participate for many years to come.